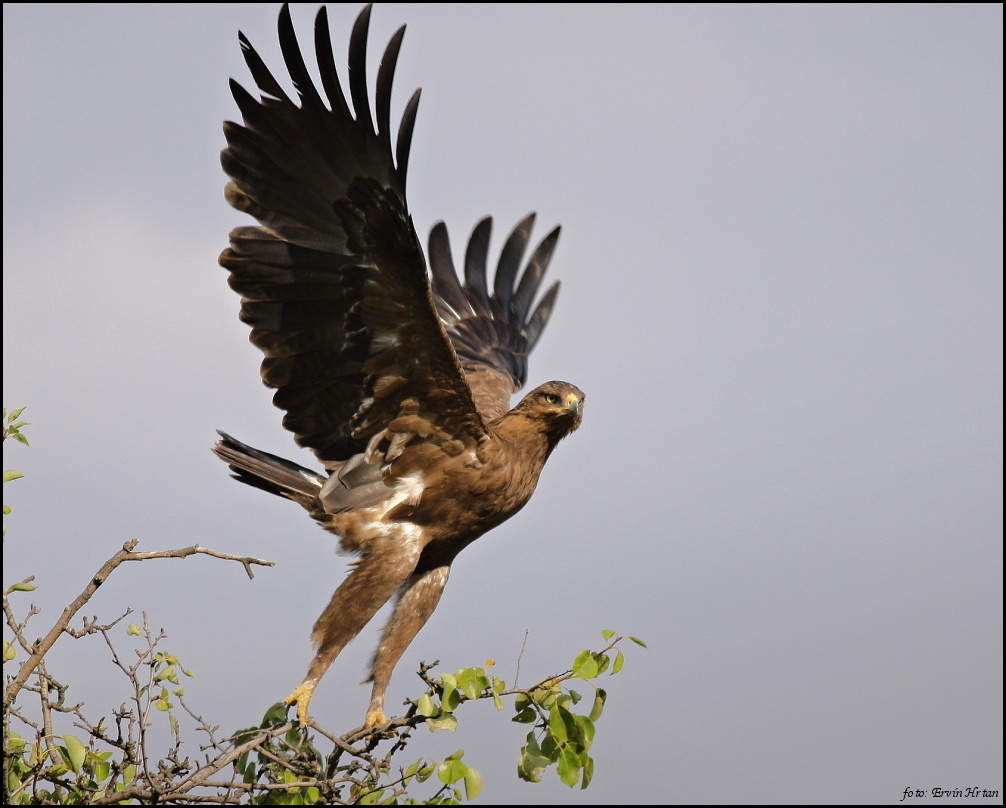 With the help of special metal construction, twigs and leaves, solid and stable artificial nests were created, which are a safe place for breeding of eagles. Artificial nests prevent losses during nesting by nests being dropped or chicks and eggs falling out from nests. Artificial nests have been installed in places where the original natural nest was damaged or destroyed.

Forest - environment scheme to protect the habitat of raptors and owls

The project has developed forest - environmental scheme which has been incorporated into the Rural Development Programme for the programming period 2014-2020 under the measure "Forest-environmental and climate services and forest protection" as operation “Payments for forest-environmental commitments on protected bird territories ". It gives land owners opportunity to apply for funding if their operations contribute to the protection of breeding habitats of any from 24 kinds of endangered bird species, including the Lesser Spotted Eagle.

2 / Improvement of the feeding habitats for the Lesser Spotted Eagle

In Special Protection Areas of respectively Horna Orava and Laborecka vrchovina Mts, special technical elements were installed on columns of 22 kV lines that prevent injury or even death of birds resulting from electrocution. Since the 22 kV power lines pass through farmlands, where the Lesser Spotted Eagle hunts for prey, by this action safe feeding habitats for the Lesser Spotted Eagle were created on 57,581 ha in these two SPAs.

Control of hazardous chemicals in the feeding habitats of the Lesser Spotted Eagle.

Samples of feathers of the adult Lesser Spotted Eagle from eight SPAs were analyzed for the presence of 650 chemically active substances all of which can adversely affect the health of eagles. The results of analyzes were negative that gives an assumption that the Eagles will not be contaminated by chemicals.

Under the measure "Agri-environmental and climate services and forest conservation" were to Slovak Rural Development Programme for the programming period 2014-2020 incorporated operations “Suslik habitat protection, Habitat protection of natural and semi-natural grasslands and "Bio-belts on arable land". Owners and users of agricultural land can apply for financial support provided they manage the land in environmentally sound manner.

New knowledge about the population of the Lesser Spotted Eagle

Population monitoring of 170 pairs of the Lesser Spotted Eagle was implemented in eight Special Protection Areas in Slovakia in the period 2011 – 2014. Monitoring generated huge amount of new data and knowledge, which will be used for more effective conservation of the species. Conservation status of the species was assessed in the individual SPAs. The State Nature Conservancy will use these assessments in the preparation of management plans for the SPAs. Project delivered also documents containing recommendations for conservation management of the species and its habitats in Slovakia as well as information about available support schemes, These documents are addressed to both, the State Nature Conservancy and also to the owners and users of forest and farmlands.

International cooperation in Protection of the Lesser Spotted Eagle

Informing the public about the project and promotion

The slogan has potential as a motivation in a broader sense: it recognizes/includes also owners and users of land or other entities that carry out activities respecting ecological requirements of the Lesser Spotted Eagle.

Educational and environmental education activities for primary and secondary schools support the synergy effect of all project activities aimed at increasing the overall public awareness of the way of life of the Lesser Spotted Eagle and ways for its protection. The form and content of lectures and field excursions were differentiated in consideration of the age of children and students. The lectures were supplemented where necessary, with role-playing simulating various aspects of the eagle or other raptor´s life.

Meetings and communication with stakeholders

Stakeholders meetings were attended by representatives of the State Nature Protection, state administration offices, the Slovak Environmental Inspectorate, State Forests, private owners and users of agricultural and forest land, and hunting associations. Stakeholders were informed of the ecological requirements of the Lesser Spotted Eagle and appropriate management of its breeding and feeding habitats and related incentive measures.